We Had a Ball! 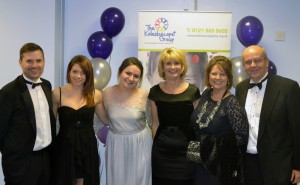 Some of the CW team (L-R Hayley, Alison, Mandy, Mel & Nigel) with Greg, PR & Communications Manager for The Kaleidoscope Plus Group (far left)

Last week the team donned their glad rags to attend CW client The Kaleidoscope Plus Group’s inaugural World Mental Health Day Charity Gala Ball. And what a night it was – we did indeed have a ball! We’re yet to hear confirmation of the final figure but by the sounds of it lots of vital funds were raised, ensuring the charity can continue their great work promoting positive mental health and wellbeing and helping to create brighter futures for their service users.

We have been working closely with The Kaleidoscope Plus Group for several years so when we were asked to attend and perhaps also sponsor the charity ball we jumped at the chance to do both. We happily provided sponsorship and assisted with the sourcing of a couple of silent auction and prize draw items (including a meal at newly Michelin-starred restaurant The Cross in Kenilworth where Nigel’s son chefs!). We also designed the program and produced a whitepaper that was launched at the event.

A joint venture between The Kaleidoscope Plus Group and the ball’s headline sponsor, work programme provider Intraining, the whitepaper draws attention to the nation’s declining mental health and argues the importance of promoting positive mental health in the workplace. Within the paper the two organisations share their experience of supporting individuals in finding and sustaining employment and helping employers in supporting the wellbeing of their staff. They describe some of the positive steps currently being taken to promote wellbeing in the workplace, as well as outlining the challenges that lie ahead and the work still to be done. If you’d like a copy just let us know.

On behalf of all of us here at CW we would like to say a huge thank you to Greg for inviting us to be involved in what proved to be a very special evening (and for not sitting any of us too close to the stage!) Nina Conti provided the evening’s entertainment (and lots and lots of laughs!) however we discovered that sit too near the front and you may become one of her victims! For those unfamiliar with Nina’s ventriloquist act, here’s a taster: