The PAW approach – ‘Pooch at Work’ 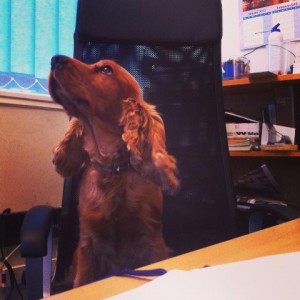 Here at CW we have a soft spot for anything cute and fluffy, so when Victoria our senior account manager bought little Henry in, we all went a little gooey inside – well the girls did anyway!

At first Henry, a two-year-old golden Cocker Spaniel, was very inquisitive and wanted to put his nose in places it wasn’t always welcome, but we are now in the safe knowledge that every corner and sniff has been investigated thoroughly.

Henry quickly became very much at home and now lounges on the sofas awaiting his next bit of attention or treat, he even keeps guard and lets the postman know who is boss, apparently it’s Henry!

So, this got us thinking: “What is it about having a canine friend in the office that puts a smile, not only on our faces, but all our visitors?”

After looking into it a little, we discovered that our furry friend is very special indeed.

And it’s not just us. Google, for instance, has a policy for welcoming four-legged friends. Cats, however, aren’t so fortunate. “Google’s affection for our canine friends is an integral facet of our corporate culture,” the company’s code of conduct says. “We like cats, but we’re a dog company, so as a general rule we feel cats visiting our offices would be fairly stressed out.”

Amazon has a similar policy. Its headquarters in Seattle usually has around three-dozen dogs in on any given day.

Three benefits of having man’s best friend around the office include lower stress levels, higher productivity and a higher level of motivation. Apparently, it’s all to do with the fact that humans release a hormone that helps us feel relaxed and happy when we are around dogs.

Sounds like there’s no downside then, so bring on the dogs!