The human side in a hard-hitting business story

Recent research by Bacs – the automated bank payment scheme – reveals that at any one time, over a million small businesses in the UK are waiting for payment for goods or services, and that the collective debt stands at a staggering £30.2 billion.

Late payments have a crippling affect on small businesses, who frequently find that larger companies simply impose their own payment terms. According to the research, smaller firms are forced to wait an average eight weeks after bills are due, yet feel they cannot make a stand for fear of losing business with the customer.

A special report we wrote for First Voice – member magazine for the Federation of Small Businesses (FSB) – provoked one of the strongest reactions from readers we’ve yet seen.

In it, we interviewed Steve Paul, whose plastering business collapsed last year because of unpaid bills by a large construction company.

It took enormous courage for Steve to speak out because he is still locked in a legal battle to recover £450,000.

He spoke movingly of the anxiety he endured, as well as his distress at having to lay off employees. “That was the worst thing;” he said, “having to tell people who’d worked for me for years that they no longer had a job. They’d done nothing wrong. There were times when it reduced me to tears.

He added: “There was a time, in this industry, when a handshake was good enough. It doesn’t mean a thing now.”

Stories like this really resonate with readers – whether they’re business owners facing similar issues, or just ordinary folk, moved by Stuart’s plight and the colossal injustice of it.

Tackling the scourge of late payment remains one of the FSB’s most urgent goals, and First Voice will continue to seek out the stories that highlight the issue, and keep the issue in the public eye.

Open a PDF of the article 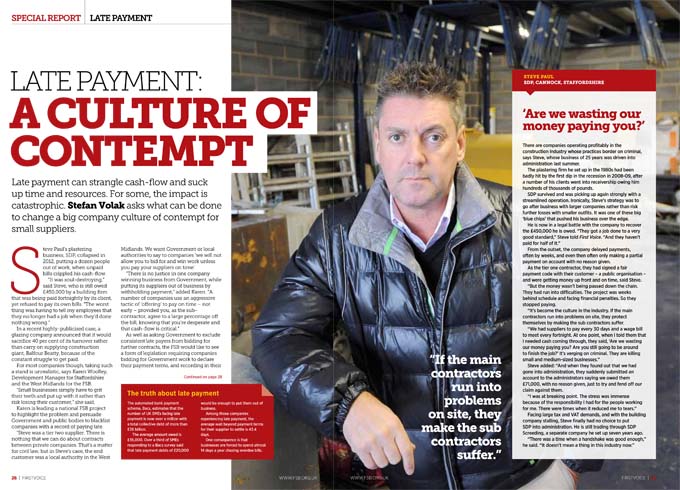