Road testing an idea in the line of duty

A politician on the cover just ensures the magazine goes straight to recycling.

That pithy comment from a reader reinforced what we’d long known, but it certainly helps to have it confirmed in a focus group. We were sampling the views of the readers of First Voice – the Federation of Small Businesses’ flagship publication.

We’ve made it our policy always to feature a member on the front. After all, it’s a magazine about members, for members, and focusing on the issues that concern them.

One of the issues exercising large numbers of high street retailers and town centre service providers at the moment is the cost of parking. 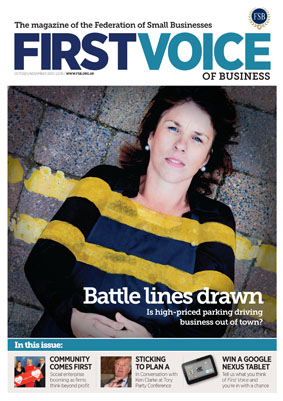 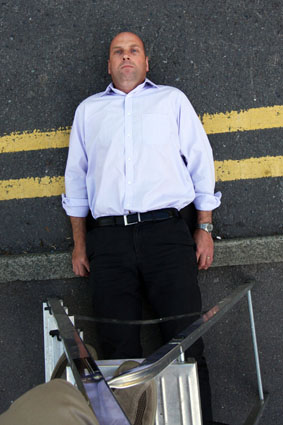 So in the most recent issue we reported on how much revenue local councils are making though parking permits, charges and fines, and spoke to a number of firms who say the cost of parking is driving business out of town.

Yarm in Teeside is one town where the battle is raging fiercest between the business community and the authority, which seems determined to impose charges in the teeth of fierce opposition.

Aiming for a picture with real impact, while pursuing our policy of putting a business owner on the front, we persuaded Kaye Allan to try something a little different.

Before putting our suggestion to Kaye, First Voice editor, Stefan, put his own life (or at least dignity) on the line in the road outside the offices of CW Content Works. A small crowd of perplexed onlookers gathered to offer helpful suggestions. But having seen the test shot, Kaye spiritedly agreed.

“We thought it was a great idea,” she said.

Photographer, Chris Parker, got her to lie down in Yarm High Street for the shot. Then designer, Ian Feeney, photoshopped double yellow lines over her body.

The result was this striking image, which sums up the feelings of local traders, outraged by their council’s determination to drive through a parking policy they say will damage business in the high street.

All in the line of duty.